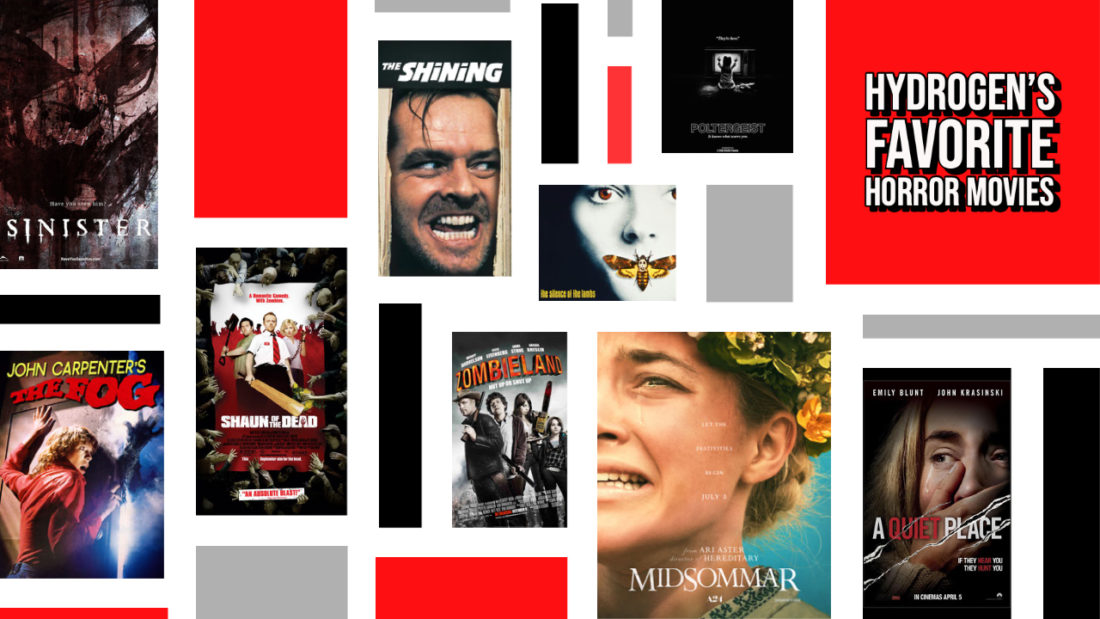 October 31, 2022 In About us, Opinion, Staff By Chrisopher Smith

It’s that time of the year again where every streaming service releases their library of horror movies for us to watch again with our favorite snacks and a bowl of popcorn in our laps. From monster films and haunting ghosts, to a few psychological horror gems, we have it all here. Members of the Hydrogen team have put our heads together and compiled a list of our favorite horror movies to watch, with the lights on, this Halloween. 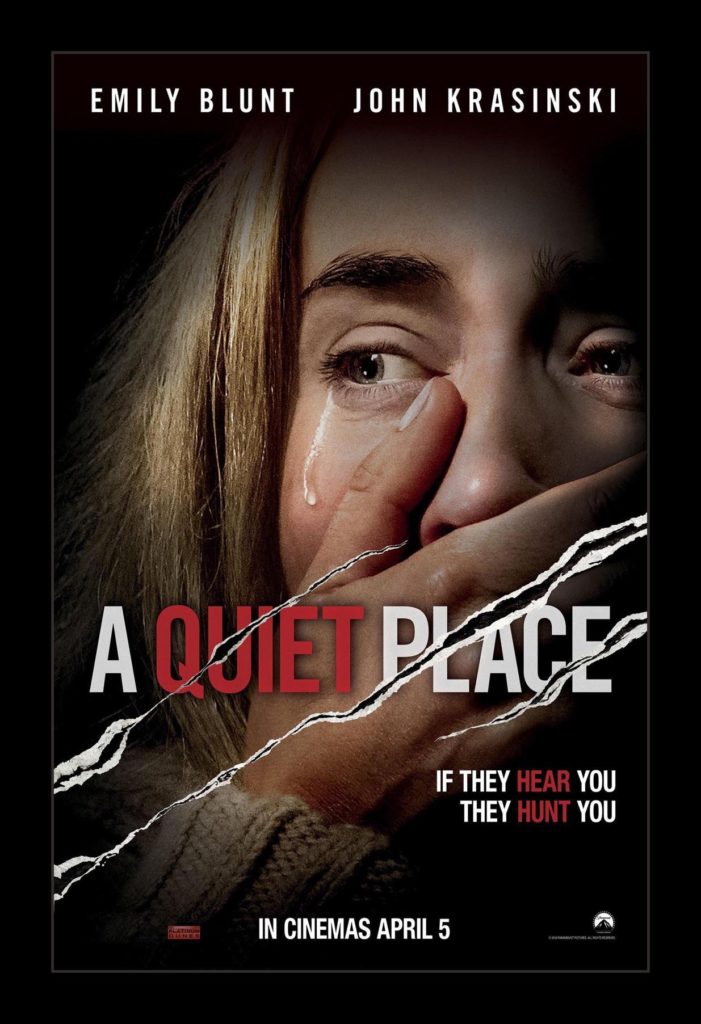 A monster film unlike any other in the genre, A Quiet Place is an original modern horror film that is vividly intense and unironically quiet. Yes, the film contains few words and little dialogue. However, the silence is to its benefit. A Quiet Place is tense, frightening, and stressful for its entire runtime. Focusing on a family trying to survive a devastating alien invasion, the story is shocking from the very beginning. To help explain more of the background and lore, this film plays with storytelling in a unique way, making you focus on every piece of newspaper or picture hanging in the background.

From a character perspective, the tremendous acting elevates each scene and allows the audience to empathize with each character. A primary theme throughout the film is the struggles with parenthood and how to best protect your children in a hostile and dangerous world. Each character interacts with this theme from a different angle, adding a deep and complex approach to this film. 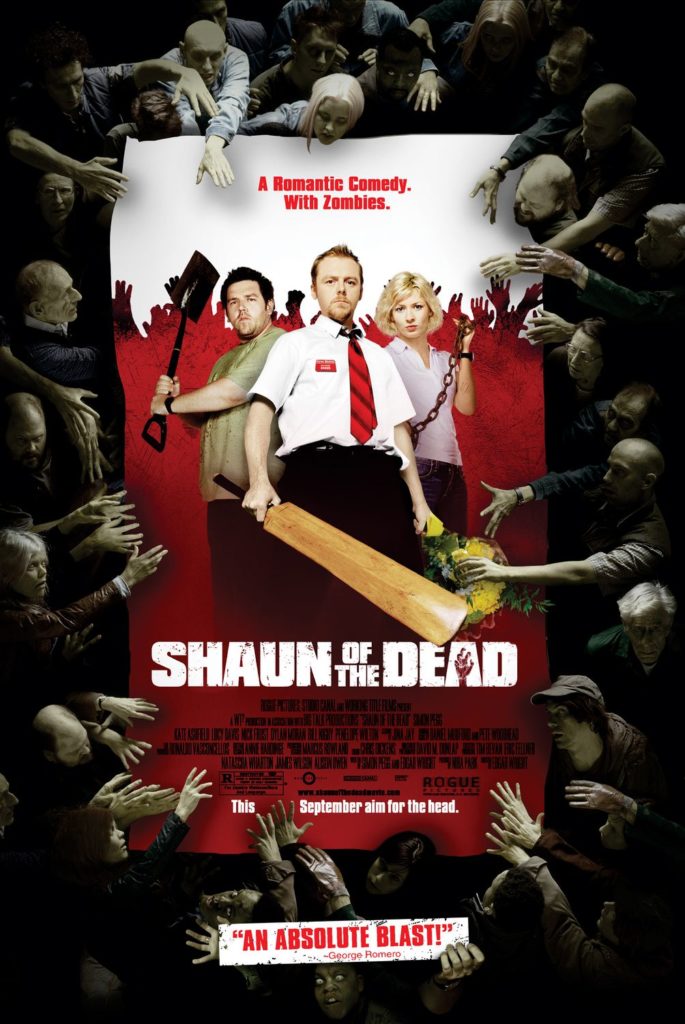 Shawn of the Dead

A cult classic zombie film, Shawn of the Dead is a fun take on a genre that commonly includes more serious films than comedy. From the beginning, there is already an air of sarcasm to this zombie flick. However, behind a facade of humor is a deeper metaphor about modern society and how we sleepwalk like zombies throughout our lives, never quite seizing the moment. Our main character is stuck in a dead-end job, living in a small town, and going on dates with his girlfriend at the same local bar each time. Only after the zombie outbreak begins, does he start to realize the importance of those around him and the relationships he took for granted.

Not extremely high on the “scary” end of the horror movie spectrum, Shawn of the Dead does offer several high-anxiety moments. From the moment zombies begin appearing on screen the tension begins to pick up and doesn’t come down until the final moments. 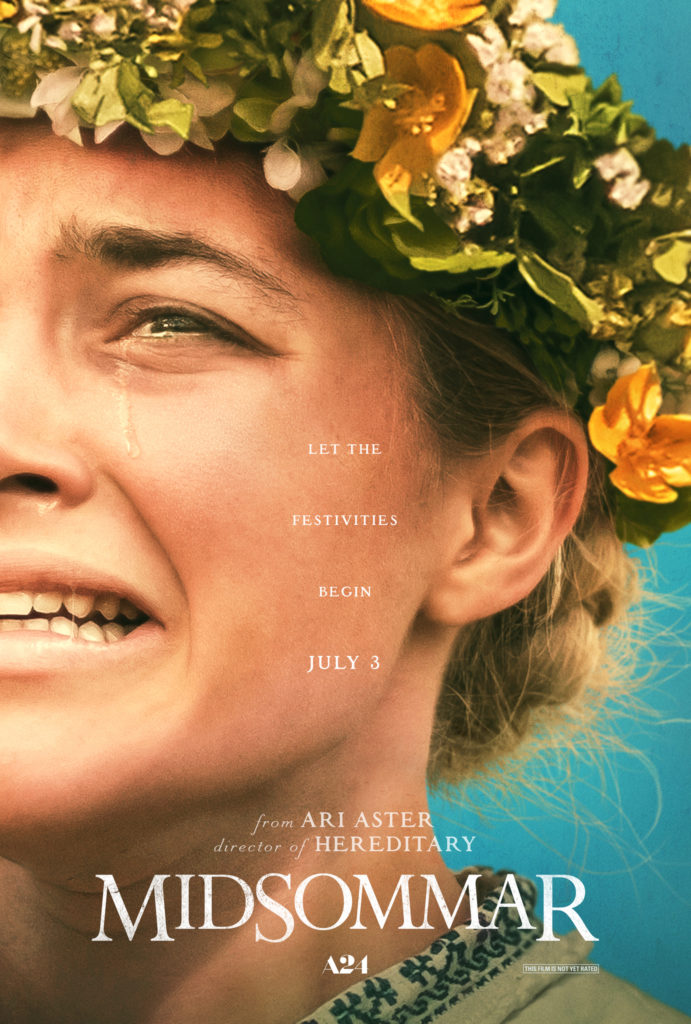 An unsettling dive into trauma, loss, and paganistic culture, Midsommar is psychologically disturbing, dialing up the tension and suspense to eleven. The main character must navigate loss and trauma while she deals with a dysfunctional relationship. This film slowly paces you through its plot as more unsettling interactions and events begin taking place.

As a contrast from most horror films, Midsommar takes place mostly during the day. The shift from the first twenty minutes of the film taking place during the night, towards daytime and a sunny backdrop, does not detract from the anxiety, or the disturbing aspects of the film. As a fan of psychological horror, Midsommar is a must watch! 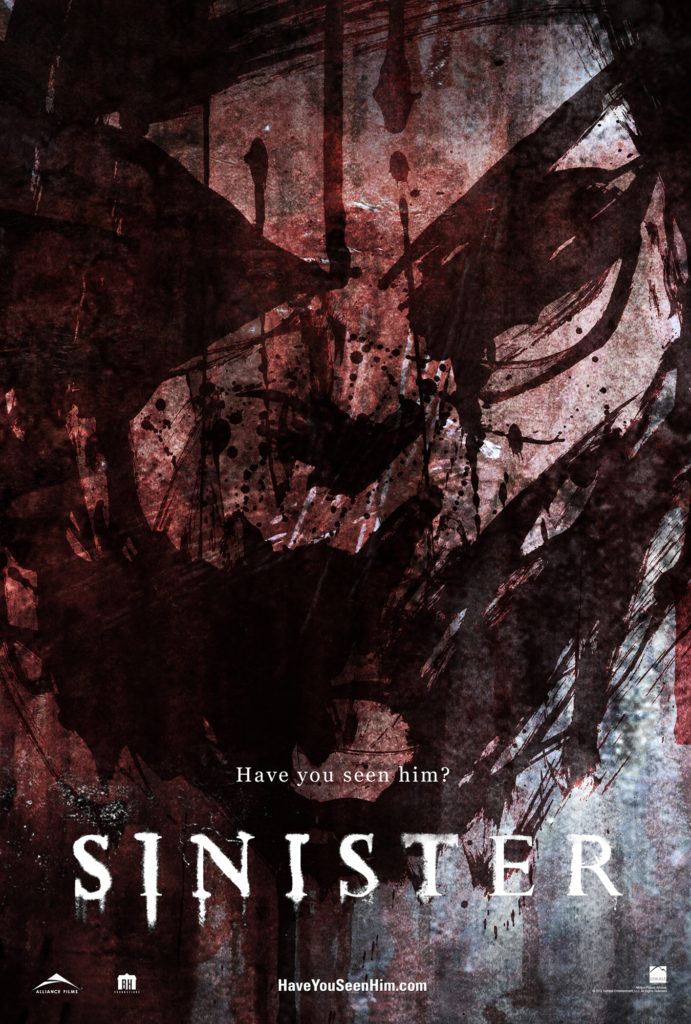 Sure to disturb even the strongest of horror movie watchers, Sinister doesn’t pull punches in the horror, tension, and suspense. Much of the story takes place in an old house that a family moves into. The father is a writer looking for the next big story, and upon finding disturbing super-8 reels in the attic, decides to watch them. The real horror magic is here as the plot is slowly unraveled through “home video” style super-8 footage of gruesome murders.

Since its release over a decade ago, this film has amassed a cult following with critics at the time giving praise to its writing and high-tension moments that keep you on the edge of your seat in anticipation. The ending is sure to surprise many with the final reveal being disturbing for the audience. We won’t talk about the sequel, a cataclysmic letdown compared to the original, but this one should have a place in your horror movie lineup. 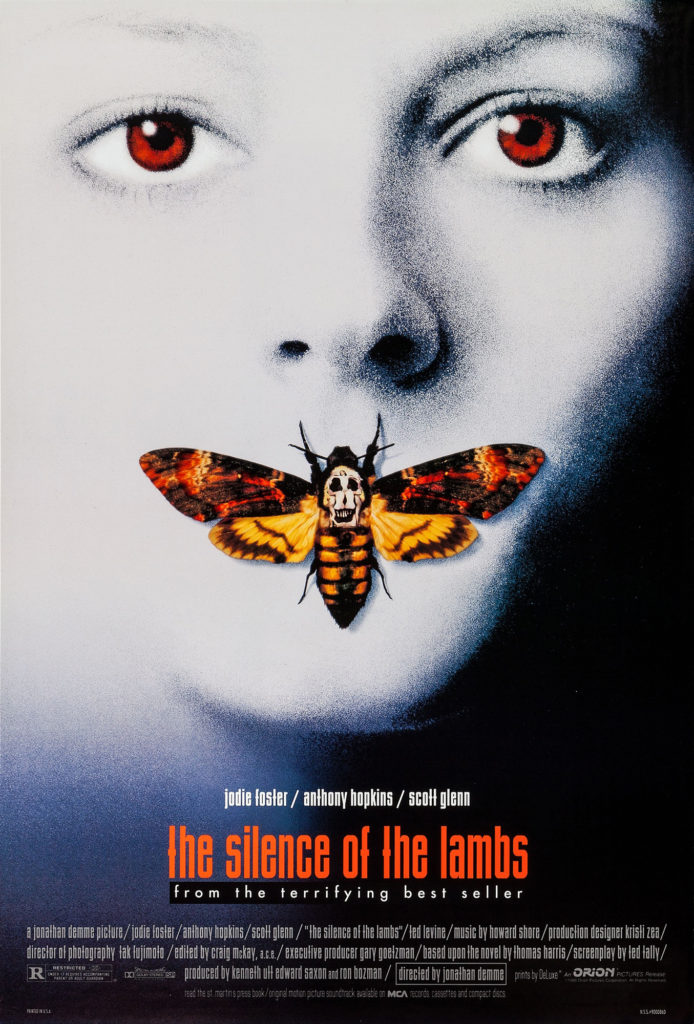 The Silence of the Lambs

None more iconic, save for The Shining, The Silence of the Lambs is routinely cited among some of the best movies of all time. Looking at this from a horror movie perspective, The Silence of the Lambs falls squarely into the psychological horror genre. Meant to subvert expectations and disturb you on a deeper level, this film has managed to captivate audiences for decades. In fact, two of our team members offered up this movie as their favorite.

It is also worth mentioning one of horror film’s most influential villains, Hannibal Lecter. Brought to life by the performance of Anthony Hopkins, Hannibal Lecter brings an unsettling energy to each scene. Following his performance, they would later make multiple sequels and spinoffs. A horror movie favorites list would be incomplete without The Silence of the Lambs making an appearance. 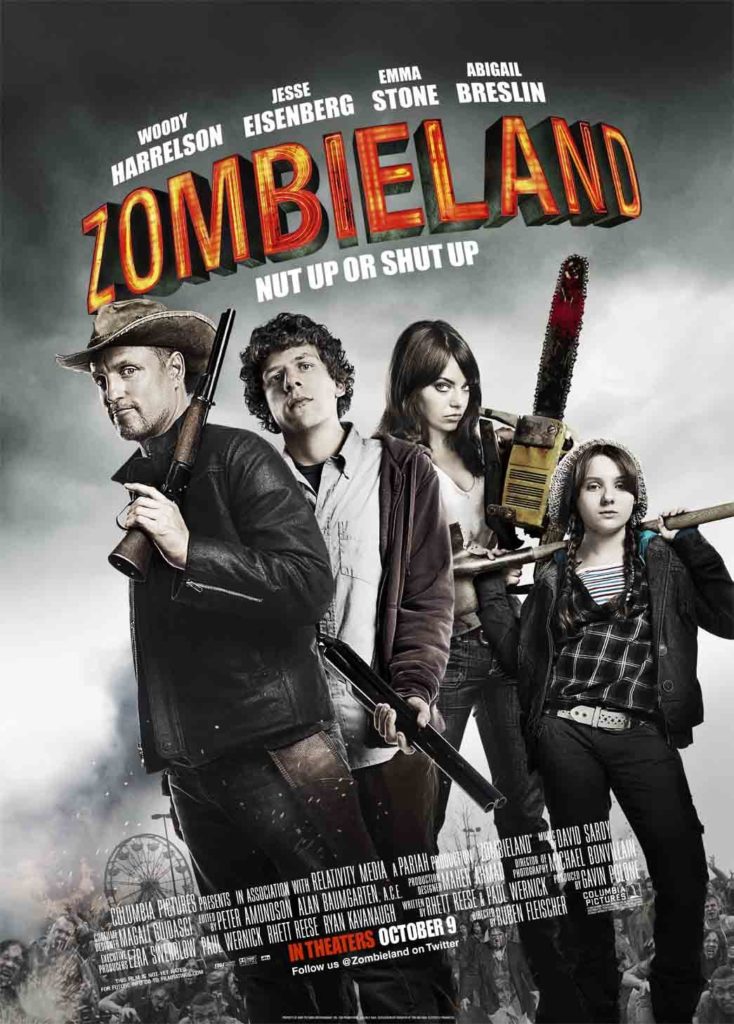 Zombieland is a comedic zombie film that doesn’t take itself too seriously, yet has become heavily renowned for its characters, over-the-top action, and a few hints of suspense. So beloved by fans who never stopped clamoring for more, this classic was eventually awarded a sequel after a decade of waiting.

Central to its theme, Zombieland is loved for its main character’s list of rules to surviving the zombie apocalypse. Ranging from “cardio” and “double-tap” to “enjoy the little things”, these rules serve as a fun tongue-and-cheek way to advance the plot and express an underlining message of the film. Not the scariest or the most suspenseful zombie film on our list, however, Zombieland does several things well that are often overlooked by horror films such as making the main characters interesting and worth caring about. This zombie film should have a permeant spot on your watch list. 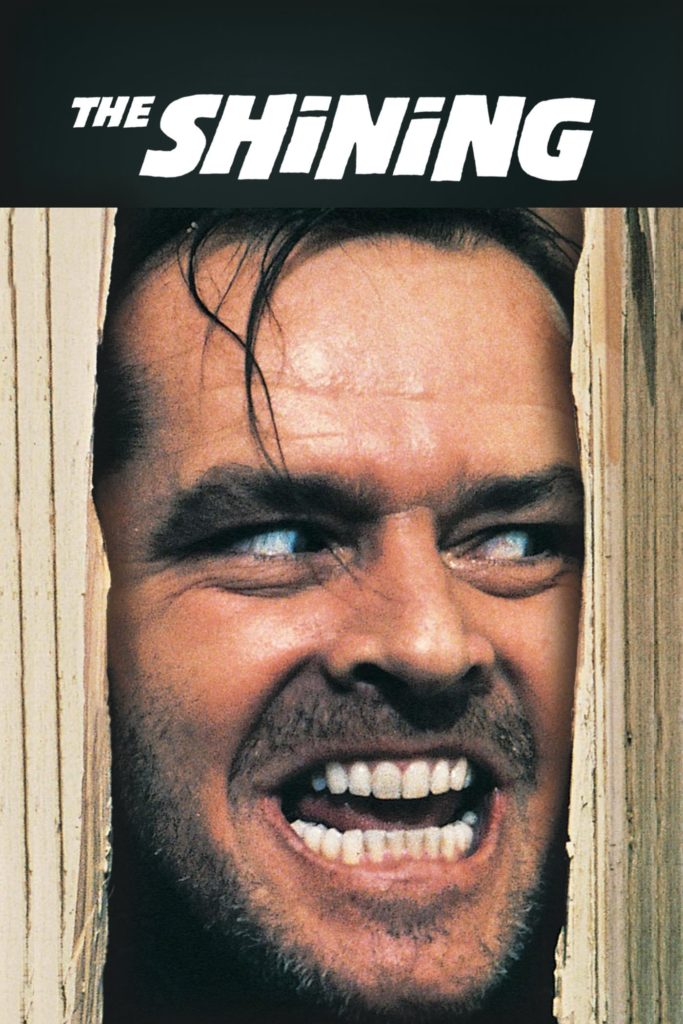 The Shining is often brought up when discussing horror movies and, for good reason. Released in 1980, The Shining has become a center piece on top of horror movie tier lists. Leaning on the story written by Stephen King, this film is a journey into madness that’s well executed by the director Stanley Kubrick and beautifully performed by Jack Nicholson. Even the theatrical poster art, designed for the film by noted Hollywood graphic designer of the time Saul Bass, is iconic for its creepy doll face set behind the “T” of the movie title.

Dated only by the technology of the era, The Shining is a horror movie masterpiece that continues to stand the test of time. As long as there are horror film tier lists every year, The Shining will continue to make an appearance near the top. 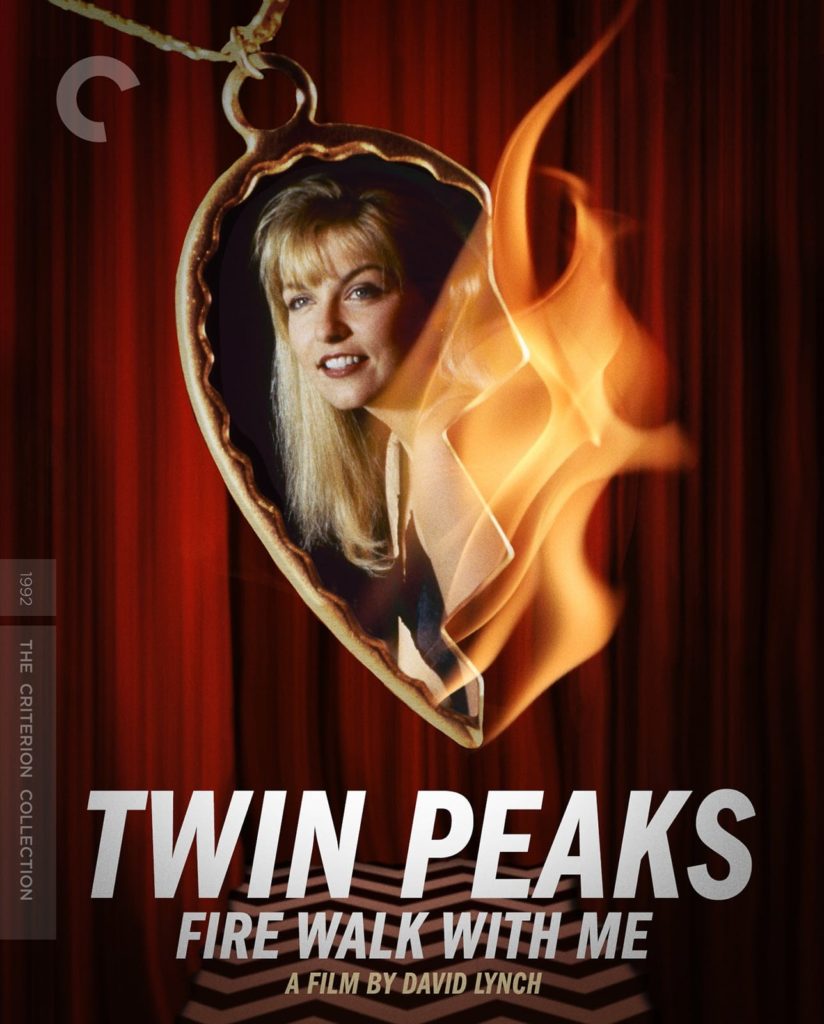 Twin Peaks: Fire Walk with Me

A prequel to a TV show released earlier, Twin Peaks: Fire Walk with Me was a divisive movie at the time of release in 1992. Recently, critics and fans have shifted their tone and began viewing this film in more positive light. Twin Peaks is a psychological horror film that follows the investigation into the character Teresa Banks and the last seven days of Laura Palmer’s life. Since the release of the film, an additional ninety minutes of deleted scenes were added in to a new version of the film titled Twin Peaks: Missing Pieces. Not a common pick, Twin Peaks might fit the niche that every psychological horror fan is itching for this Halloween.

Another of John Carpenter’s classic 80’s horror films, The Fog is a familiar fright despite being more dated by modern horror movie standards. The film is centered around a dense fog that engulfs a small coastal town and is accompanied by paranormal, vengeful, ghouls. As a fun marketing tactic not so commonly used today for horror movie releases, some movie theaters placed smoke machines down to help promote and scare audiences before the film. However, The Fog was not well received by critics at the time of release. Since then, fans have reviewed this classic more favorably.

As all classics tend to go, The Fog did receive the remake treatment in 2005. Similarly, to the original, it performed well at the box office but was not well received by critics. However, if you are interested in classic and original horror, The Fog is sure to impress. 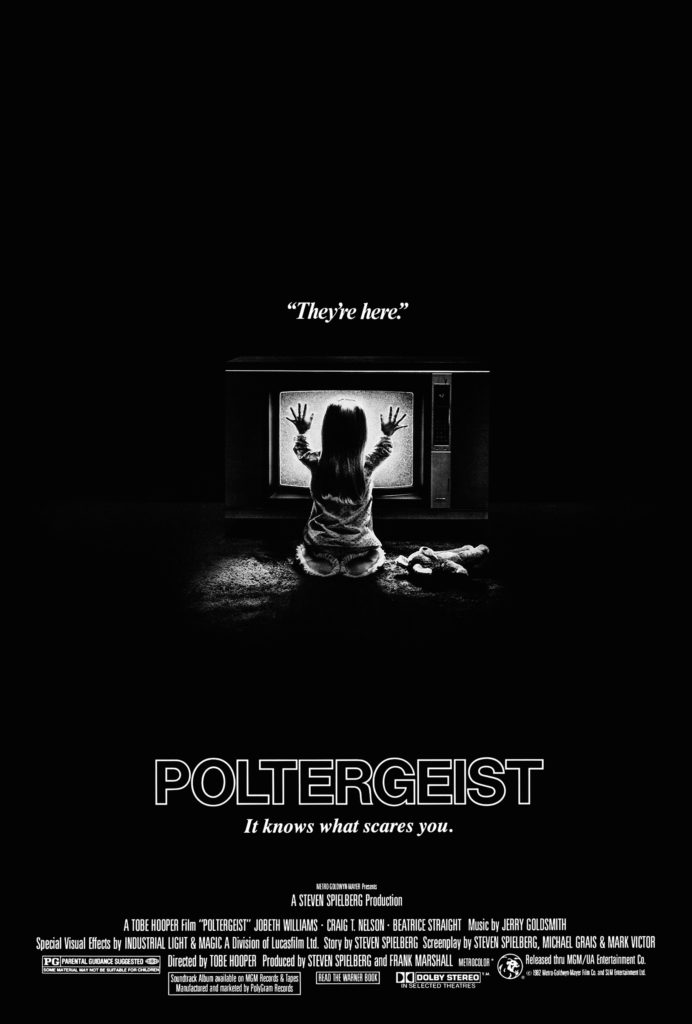 Another entry into the crowded 80’s horror genre, Poltergeist is beloved by many. Released in 1982, Poltergeistwas a huge critical and commercial success earning high box office numbers and awards. Specifically, Poltergeist was praised at the time for its special effects. Created by ILM, the famous visual effects studio behind Star Wars, Poltergeistwon a BAFTA award for best visual effects. In addition, critical reviews at the time praised the film for its direction, writing, and nonstop scares. It instantly became a classic of the horror genre, maintaining great reviews across many sites to this day.

Since its release, Poltergeist has graced numerous horror movie lists throughout the years. Many still believing it to be one of the scariest movies of all time, as our team members here at Hydrogen can attest to. If ghosts, demons, and paranormal events are what you seek, look no further then this horror movie classic.